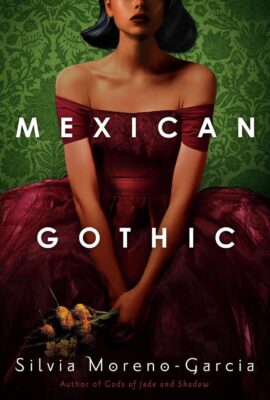 Set during the fifties, we are introduced to a rather likeable young socialite called Noemi, who lives in Mexico City. When alarming letters start to arrive from her newly married cousin, it worries both the young socialite and her father. The letters seem to imply the cousin is having some kind of mental breakdown. The father instructs Noemi to visit her cousin and investigate whether she needs psychiatric help.

She is sent to a distant town, where she finds her cousin living in a mansion with her husband and his strange family. Upon discovering disturbing secrets of the mansion’s inhabitants, she hatches a plan to escape with her cousin. The only problem is, it’s the not living inhabitants that are holding her back. It’s the mansion that refuses to let her leave.

While the book contains all the trappings of gothic elements, the author mixes it up with Darwin’s theory of natural selection, along with eugenics and colonialism to give a fresh spin to the horror fiction. At the same time, the author sheds light on racism that was born from Mexico’s colonial past. This part is instrumental to the plot, but not in a way that it overtakes the storyline. The story is still deliciously gothic, and you can’t help but fall in love with Noemi, who is both charming and headstrong.

Though the book is around three hundred and something pages long, the author does not rush the narrative. The pace of the novel is slow, with a gradual build up. You might be forgiven at first to think the plot is simplistic and modest for a gothic story, but as the story develops, it becomes disturbingly interesting and hard to put down. While the chapters don’t usually have cliff-hanger moments, it still commands the reader to binge read another chapter.

The book stayed in my mind long after I had finished it. I wondered about the fates of the characters and marvelled at author’s indulgent storytelling. This book comes highly recommended.