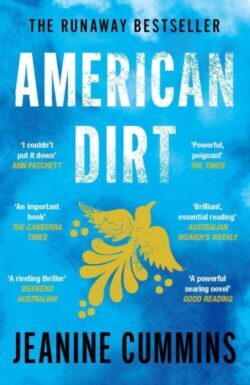 The story begins on a high octane note, taking us on a nonstop journey of mother and son as they leave Acapulco for United States. They have witnessed a murder of their family members at the hands of a cartel. They are on the run from them and have decided to get out of the country as fast as they could before the cartel catches up with them. Along the way, they meet an assortment of characters who are either heading towards the same journey or putting a kink into their plans.

From jumping trains to paying a coyote to help them cut across the desert allows the readers to feel they are with them and empathise with the characters. It is a book that is hard to put down and makes you think about the characters long after you have finished reading.

The book hasn’t been without controversy. There are members of the Latinx community who believe Jeanine Cummins, a non-Mexican, has used her position to exploit the portrayal of Mexican and migrant experience; a story that was not hers to tell.  Even though it is fictional, it is inspired from real life migrant experiences, experiences that she had never been a part of. Others accuse the author of appropriating Mexican and migrant traumas and dressing it up as entertainment consumption for non-Latinx audience. As someone who is not from the Latinx community, my commentary and knowledge is limited to what I think I know. What I thought was a topic sensitively handled is not the sentiment shared by those in the Latinx community. I do agree that some stories are better left to authors who come from that place of experience.

I believe this presents us readers with an opportunity to read far and wide, and to seek authors who write from a place of experience and authenticity.