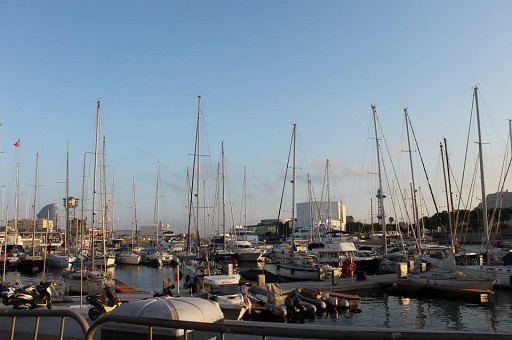 A majestic looking city born on a 1000 years old ground is only a baby, 150 years young. The architecture in the city gives an illusion that it had been born in the Baroque, Renaissance, and Romanesque periods. It merely reflects its youth; ever evolving and keeps popping up everywhere, drawing inspiration from other cities of Europe; London, Paris, Florence to name a few. In the week I was there in Budapest, there was a construction going on in the Buda side; drawing inspiration from the East.

Budapest is famously called the city of healing waters because for centuries, natural spring waters have been flowing beneath the city grounds. When I arrived in the city, I was exhausted and completely burnt out; but the incredulously magical waters nourished and healed my body, mind and soul. I visited the famed Rudas thermal bath house on the Buda side, which serves ladies only on Tuesdays. Inside, there are five round pools, with varying degrees of temperatures.

The Rudas bath house is actually one of the oldest bath houses in Budapest, dating back to the 16th Century. It has a dome like ceiling, with Turkish influenced interior. After sitting in the pool for a bit, I had an aromatherapy massage. I felt my body relax for the first time in a very long time. Then I went back into the pool, letting the water heal me. I felt like a new woman when I left the bath house. My skin felt nourished and glowed in the mid-summer heat.

I took a tour of Danube Bend, which took me to the north of Hungary and allowed me to spend 15 minutes in Slovakia. The River Danube is majestic and often called the Queen of rivers in Europe. It passes through ten countries in Europe: Romania, Hungary, Serbia, Austria, Germany, Bulgaria, Slovakia, Croatia, Ukraine and Moldova. It is one of the longest rivers in Europe. I highly recommend this to anybody visiting Budapest. It doesn’t disappoint!

I didn’t meet anyone, maybe because I am not really social. But I did meet a retired economist masquerading as a tour guide. He was far by the most interesting person I had met in the entire trip. He enriched my mediocre intellect by imparting historical knowledge of Hungary. Sadly to say, I came to Hungary with absolutely no knowledge about its history apart from the fact it was once a communist country and a part of Hapsburg dynasty many centuries ago. So naturally I was embarrassed when asked what I knew about Hungary; or any revolutions in connection to Hungary.

Through him, I began to see Hungary in a different light. It was refreshing and humbling to learn about its history. He told me that most people don’t refer to the city as Budapest; depending on where they live. He referred to the city as Pestbuda because he lives on the Pest side.

Towards the end, I was sad to say good-bye to him. I could imagine myself having coffee and discussing politics with him. Afterwards, I stopped by a book store and bought myself a history book.  In the next few days, with all the information he gave me, I was able to understand what each place in Budapest meant. Each statue that I walked past, I would recount a story behind it. Every building I admired, I would remember his words.

He told me something fascinating that I didn’t know: In honour of Hungary’s patron, St. Stephen (the first martyr of Christianity), the bells from all the Roman Catholic churches in Hungary and around the world would  ring at midday…even in Lahore he said (I told him my parents are from Lahore).

The last few nights in Budapest…

The last few nights in Budapest was spent venturing out in the evening, having coffee and watching the world go by. I found a restaurant in front of the St. Stephen’s Basilica and it was a perfect spot to do some writing.

When the bells rang at each hour, it was music to my ears. So angelic and pure, it felt like I was being serenaded by a group of Botticelli children giggling in all their innocence. I took the time out to fill in my next chapter of my novel, while staring at the Basilica for inspiration.

Getting ready to embark on a rail journey

The time came when I had to say goodbye to the city I came to grow fond of. My next leg of the trip was to catch an overnight train from Budapest’s main train station, Keleti station. I was nervous about this part of the journey as this was my first time travelling on an overnight train in Europe. I was worried about train delays, whether my sleeping compartment would be okay and mostly about reaching Barcelona in good time.

My overnight train to Zurich was 12 hours long and became one of the best experiences of my life. I recommend this to anyone. It took me weeks to work out different train routes and where to buy tickets. I relied on this amazing website www.seat61.com to guide me through the process. The man behind this website gave me helpful advice. I was scared, apprehensive and some of the railway websites in Hungary and Switzerland required patience and understanding on how it works.

When I got to my compartment, my heart just leapt in excitement. I couldn’t believe I was doing this and found it hard to contain my excitement. I am sure passengers in the next compartment could hear me jumping up and down.

There was was an option to use a couchette, but it isn’t generally comfortable and is available on a shared basis only. Instead, I booked a sleeping compartment to myself, which is a little costly, but worth it.

Overnight stay on the train…

I had packed an overnight bag so I didn’t have to open my suitcase. Getting changed into my night pyjamas, I watched the scenic views pass by while I had my packed dinner. Central Europe is too beautiful and it reasserted my point; that I am too much in love with Central Europe.

The train stopped by sleepy towns and villages and I watched people get off and on the train. I wondered if I would ever get a chance to visit lesser known towns and villages outside of the main cities. People often comment that I am brave to travel alone, but I am not exactly brave because I travel to the cities that are well known. It would be a brave thing to go exploring on an off the beaten track.

As the night fell…

As dusk fell dramatically, I began recalling Bram Stoker’s Dracula (one of my favourite Gothic novels) and feeling incredibly inspired, I wrote copious notes for my dark novel. A part of me wished I was headed towards Transylvania, to the Dracula’s castle.

After much excitement, I went to sleep. The bed was surprisingly comfortable and I instantly fell asleep with the rattle tattle noise of the train humming in the background. I woke up feeling fresh and alert, witnessing the beautiful alpine views of Austria. After being served with breakfast,  I reached Zurich.

I caught the next train to Geneva. When I got to Geneva, it was already late morning. From there, I caught the train to Montpellier (France). At Montpellier, I caught the final train of this journey.  I was tired but excited from the journey I had. It was night time, so I focused on my writing. The guy in the seat across me kept distracting me with his gasps and fidgeting. He was watching something on his iPad, obviously a suspense drama. I put on my music and let Lana Del Rey guide me through my creative writing.

As I arrived very late in the night, I stayed at a hotel that is 50 metres away from the main train station. The main station connected me to the underground and also national and international rail.

After my exhaustive trip, I learned what not to bring next time I travel by train. I learned suitcases aren’t practical for rail journeys and that a backpack would have been perfect. While I did struggle managing a suitcase, I found that chivalry wasn’t dead. At every station, there were kind gentlemen who offered to assist my suitcase on and off the train. To all those gentlemen who helped carry my luggage up and down the double decker train stairs, thank you from the bottom of my heart.

Barcelona is truly a Gaudi’s city; colourful, symbolic and spiritual. From Sagrada Familia to Gaudi inspired parks and buildings, this city is definitely a city of artists. The first visit I made was a trip to the Sagrada Familia, which was typically tourist-y of me! The friendly tour guide explained in details the inspiration behind Sagrada Familia and where Gaudi drew his inspiration from. While the cathedral is still work in progress, it will be completed in our lifetime. Hallelujah!

Get lost in Barri Gothic

During the mid-summer heat, Barcelona encouraged me to take it easy and enjoy the leisurely strolls around the city. I fell in love with Barri Gothic (Gothic Quarter). It is a place where you chance upon it unexpectedly and then never to find it again. It resurfaces after your third or fourth attempt. Barri Gothic is a myriad of long winding alleys that delightfully leads to different courtyards and back streets that never disappoints. The area around Barri Gothic used to be a Roman village and remnants of its medieval past are still present today.

Crossing through the long winding high walled labyrinth, I heard voices of families in the flats above. I imagined briefly the kind of families that live in those flats.  I found an art gallery where Picasso first showcased his art work.

Proud Catalan heritage and the rest of Spain….

I witnessed a protest for the independence of Catalunya. Barcelona natives are very proud of their Catalan language and heritage. You can easily to offend a Barcelona native by referring to their language as Spanish, despite Spanish also being spoken in Barcelona.

I felt I could have done more in Spain; like catching a train to Madrid for a day. It was the combination of lethargy and heat that made me quite lazy to travel outside the city. Suffice to say, I came back home refreshed and already planning my next trip.

For my next trip to mainland Europe, I’d like to do another train journey.