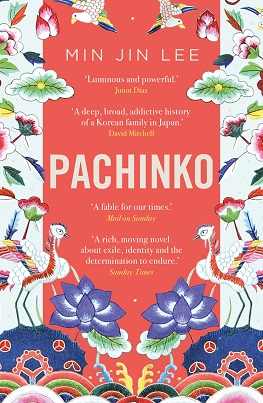 Pachinko is a sweeping saga that covers the years between 1910 and 1989.

Pachinko represents life for the Koreans in Japan, from the first generation with strong ties to the homeland, to the third generation with no connection to Korea, apart from the heritage they’ve inherited. Each generation goes through trial and tribulation, each different from the other. Pachinko is arcade games parlour, which is synonymous to Koreans, who typically run them. It is also a stereotype in the Japanese society to describe a Korean’s typical work.

The first generation, Sunja moves to Japan and is shocked to witness Korean migrants living in the ghettos and being mistreated. Both her and her sister in law, Kyunghee work hard to support their husbands and Sunja’s children. Sunja and Kyunghee dream of returning to their homeland, even when they know it is impossible.

The second generation, Noa and Mozasu are encouraged to study and learn Japanese. They face bullying in school for being Korean. One of the brothers attend a prestigious university and the other, leaves school to work in the pachinko business. Further into their lives, one of them leaves the family and moves away, passing as a Japanese. The other continues to rise within the ranks of the pachinko business.

The third generation, Solomon is born into wealth thanks to his father’s pachinko business. He attends the best schools and goes abroad for studies. Despite his family’s wealth and being born in Japan, he cannot become a naturalised citizen as the process is rather complicated. There is a fear of deportation to Korea, a place that is alien to him.

I absolutely devoured this book. Pachinko is educational and an eye opener, providing readers an insight into the lives of Korean migrants and their future families living in Japan. It is over five hundred pages long and is an absorbing read. I felt I could forever read Pachinko and continue with future generations that come after Solomon.