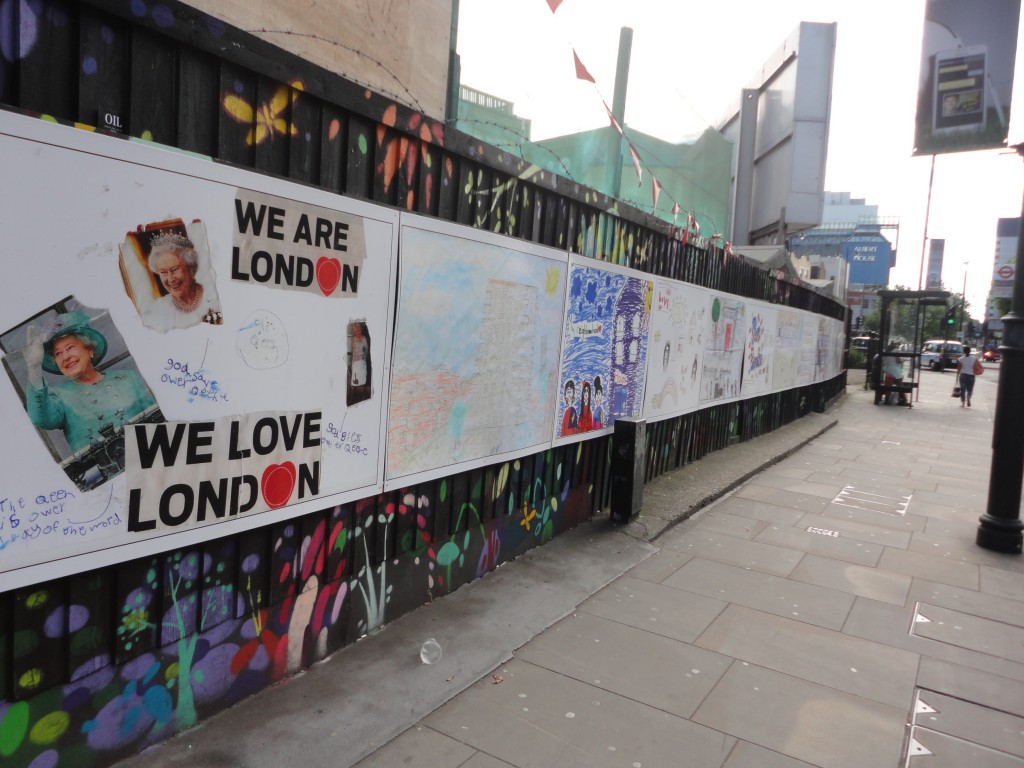 One day I was walking back to the underground station after the TEDxHackney Salon and came across a fenced wall near Shoreditch Town Hall. It was filled with drawings by school children. It was eye-catching as some were artistic; some conveyed strong messages and others were humorous. Despite not knowing the intention, I felt it transformed a bland fenced wall along the busy main road. It turned into a creative space for members of public to stop by and smile at such creativity, as I did. I thought it was quite empowering for the young school children to have their voices heard in the public space. It made me think long and hard about how we could use public spaces and convert it to express ourselves or our communities.

I am sure that in our very own neighbourhoods, towns and cities, we have come across some un-used public spaces. Some of these might either be an eyesore to look at, or are virtually abandoned. We may have never considered entertaining the thought of doing something about it because it has never crossed our minds. We might live in a neighbourhood that we don’t like because of empty spaces being misused or are unattractively desolate. But have we ever considered those un-used spaces to be opportunities in disguise? We actually have the power to do something about it. For example, we can turn an empty public space into a space where we can project our voices. We can turn the space into growing food sustainably for the community. It can also turn it into a space where we can socialise with other members of the community.

Shared public spaces teach us a lot on how we want to live our lives and what is most important for the community. It also bring communities together. It isn’t hard to get involved, as all it takes is a bit of initiative, positive attitude and inspiration from around you. Here are some of the inspiration that could change the way you look at un-used public spaces and give you ideas.

“Before I die” project

At a recent TEDGlobal conference, Candy Chang spoke about a project that she started in her hometown New Orleans (USA). She started by transforming an old empty public space into a constructive place where members of public shared their aspirations and hopes with others. The idea came when Candy noticed how New Orleans has one of the highest amounts of abandoned properties in America. Near her home, she found an abandoned property that she wanted to transform into a nice space for her neighbourhood. Driven by her ambition to learn more about her neighbours and locals, she turned the abandoned property into a giant chalkboard. She stencilled the board with a fill in the blank sentence: ‘before I die, I want to’. With chalks available, members of public could pick up a piece of chalk and share their personal aspirations in a public space.

Candy Chang is not the only one who has worked with un-used public spaces, there is a European project called ‘Lively Cities’ who are also doing a similar kind of thing. Lively Cities reclaim un-used, under-used and/or non-used spaces and transform it. But rather than going by a traditional concept where design of public space is imposed to the communities, community members are the decision makers on how to use public spaces. This projects runs in four European countries; UK, Netherlands, Belgium and France and has begun working since March 2011. It will soon finish in December 2014. It has eight partners from four countries, including five city councils, one university and two public private partnerships involved.

At a much smaller level, on the other side of the world, a young man called Muneeb ul Huq Sehgal set up an initiative for poor labour workers in Sialkot, Pakistan where he is from. Muneeb found an un-used piece of land in the poor district of Sialkot and decided to transform this un-used space into a khana ghar (food house) for poor labourers working in the area. Sealed with tents, this un-used space became a place of gathering for poor labourers who could receive cheap home-made meals.  The un-used land became a shared space and a centre of relief for poor workers. It also became an opportunity for young people like Muneeb to use space constructively to help poorer communities at a grass-root level.

What you can do

So next time you step out of your home, have a look around your neighbourhood. Ask yourself what you could do to change that empty wall you see every day, or a piece of land that could benefit you and your community? Who knows, you may be amazed with the ideas that come through your mind. It may inspire you to transform an un-used shared space into something for all to enjoy. After all, you can change the way your city looks simply by taking the initiative to reclaim un-used public spaces. If you have ideas of your own, please drop us a comment and I would love to hear from you!