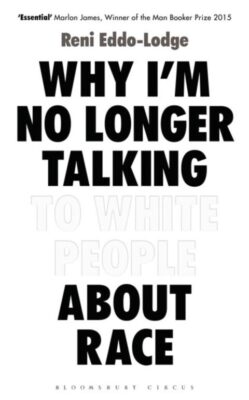 Though this book was published in 2017, it was revived after the tragic killing of George Floyd in America. Suddenly, there was a surge of people wanting to read books about anti-racism. Why I’m no longer talking to white people about race went straight to the top of the charts. Reni Eddo-Lodge became the first black British author to take the top slot on Nielson BookScan’s UK top 50 chart. The 2017 book became the bestselling title in the UK in 2020.

When the book came out in 2017, some suggested that since the book was written by a non-white person, it was not intended for white audience. Some suggested the book to be controversial and provocative without having read the book.

So, what is it about?

The book does a stellar job of exploring how institutionalised racism and white privilege are deeply embedded in the British society. Reni understands that some white people find it uncomfortable to talk about the subject of race and their failure to understand that not everyone experiences the world in the same way as they do. In a chapter titled Fear of a black planet, Reni talks about students’ protest to remove Cecil Rhodes statue at Oxford college and how this was not calling for Rhodes to be erased from history, but rather question on whether he should be celebrated.

In the same vein, when locals complained and petitioned to remove Edward Colston’s statue, it fell on deaf ears. In today’s society, British white people have a long way to go in understanding that keeping controversial statues is a way of preserving racism.

Reni states that the book’s aim is to change the national conversation about race. In order for any of us to become anti-racist, we must learn to get uncomfortable and dismantle what we once accepted to be true. Reni believes that racism won’t go away anytime soon, and to commit to anti-racism would be a long-haul task. She suggests white people need to talk to other white people about race. She also suggest that anyone who feels “burdened by their unearned privilege” should use it to make a difference.

This book isn’t just for white people. It is for everyone who is interested in learning about racism, has been affected by racism, or feel they need to learn how to be a better ally. It is a great book and I finished reading this in one sitting. This book shows us how we can contribute to the conversation about race in our work and social spaces. All of us have it within us to make an impact and difference.