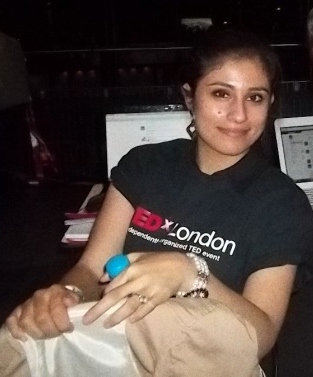 I am writing this blog to share my experience with everyone, with a hope that I can inspire those who are not yet a part of TEDx experience. For me, TEDx experience has been less about attending the event and more about the process. And through this process, it introduced me to a diverse set of people who share common links with me. I got involved with TEDxLondon when I came across an event page on Facebook. I immediately got in touch with Evan Grant who is the director of TEDxLondon and asked him if I could volunteer at this event. He was very helpful and introduced me to Robin Dhara, who was one of the key organisers of the event. Robin arranged our first meeting in which I was introduced to Richie who works with him and Biggles, who was another volunteer like me. I was given the task to handle the social media side of the event. Each week, I would visit Robin and the team at his office in London and one day I met another volunteer, Will. Organising a TEDx event was not easy as I soon learned. It took dedicated individuals who were prepared to work long hours and put in strong efforts to make it happen. Whenever I saw Robin, he would be running here and there, having meetings with various people and it was exhausting to see him like this. At the end of the event, I could see the visible relief on his face.

The day before the event, we all met up at the Roundhouse, where the event was to take place. It is such a beautiful place and there were lots of people there setting up the venue. There were volunteers who were filling up goodie bags and tech guys who were setting up the stage. I even got to see some guest speakers doing their rehearsals on the stage. I met Jenn, who works with Robin and also met Evan Grant in person but it was a brief meeting. The next day I reached the Roundhouse at 10 am, with 3 hours of sleep behind me and yet I was too excited to be tired. Richie and I helped out some volunteers with putting names in plastic jackets for visitors to wear around their necks. We met another volunteer Lisa and we passed our time amusing ourselves. I met up with Stephanie Leonard who was my partner in social media. We found ourselves a desk on the balcony, where we set up our laptops and got working. It was pretty intense as we had to focus on talks delivered by guest speakers and tweet interesting things said by them. We only met on the day, and yet we co-ordinated well with one another and did sign language to each other during the event. Our most frequent sign was the thumbs up. Although we were all a part of TEDx event, it didn’t feel like we were in the event. We were the people that managed the event. When I look back at what I did, I thought it was all very mechanical.

The theme of this event was ‘Education Revolution’ and we had a diverse line up of guest speakers who talked about education revolution; what’s right with our current UK education system, what’s wrong with it and what to do next. The guest speakers had strong opinions on education system and made pledges to do something about it. The audience were also encouraged to make a pledge and were given a pledge card in which they wrote down what they would do. From the guest speakers, I learned that technology can play a big role in revolutionising education and that we must move away from standardised way of teaching that does little to encourage creativity and critical thinking in young people. I was inspired and even though I didn’t fill out the pledge card (I was too busy), I vowed that I would do something. I don’t know what I will but I know I want to help young people.

At the end of the event, all the volunteers took to the stage and got a round of applause. After that, Robin told us to pack up. It was exhilarating and a relief that our job had been done. At the same time I realised this was it. It was over. I was a little bit sad too. I took some pictures with my team and on my way back home I looked at the pictures, with happy memories attached to them.

TEDx events are a great way of meeting new people who are serious, passionate and dedicated. These are the kind of people who inspire, encourage and motivate others. If you are not into volunteering, then you’d probably enjoy attending the event as a member of an audience, if you are somebody seeking inspiration….. or have ideas worth sharing.