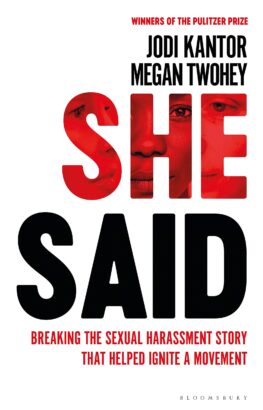 This is an account of two investigative journalists, Jodi Kantor and Megan Twohey, who broke the Harvey Weinstein story in the New Yorker, which set forth the #MeToo movement with women around the world sharing their accounts of sexual harassment using the hashtag.

This book details how the two journalists worked tirelessly in compiling evidences to write the article. It was not an easy feat as most of the victims were unwilling to come forward. They were also met with silence from the industry that sought to cover Weinstein’s misdemeanours. Those victims who did speak out had been blacklisted from the industry. This showed the power Harvey Weinstein enjoyed in Hollywood. Each chapter unmask the toxic culture of complicity at the Weinstein Company and how deep their pockets were, bullying victims into accepting pay offs to buy their silence.

She Said also covers a small part of the Kavanaugh hearings to show yet another powerful figure being exposed. But it also shows the pressure on the victim and the difficulty of coming forward publicly.

She Said delivers a powerful message that we have a greater responsibility in raising awareness and call onto those who are complicit in covering misdemeanours. It is an all-important book whose narrative has changed the world.