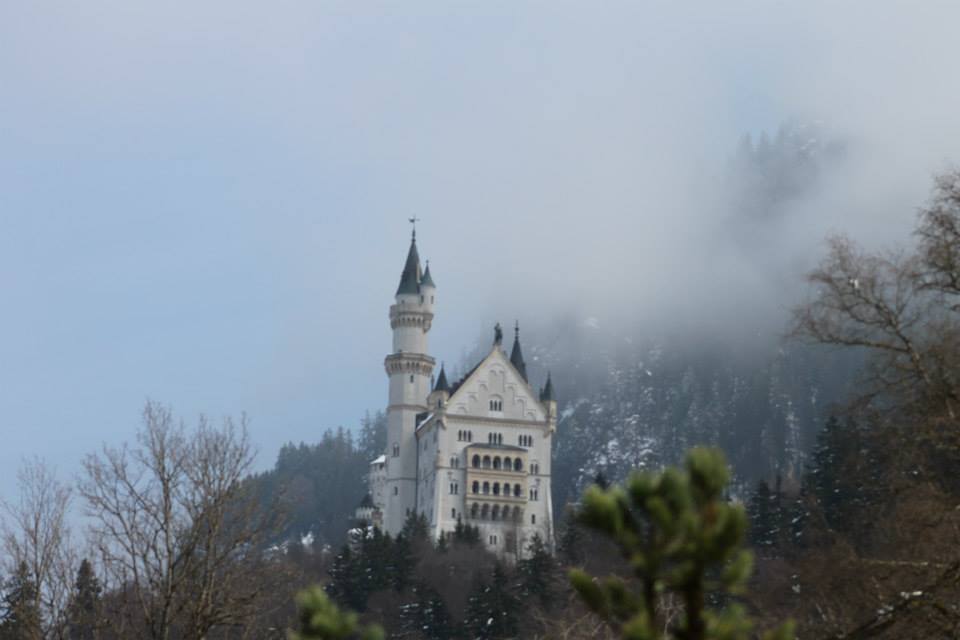 Munich or Munchen, however you please

It was a dream of mine to visit the inspiration behind Disney’s Sleeping Beauty’s Castle. Neuschwanstein Castle is nestled in the Bavarian mountains, near Fussen. I chose Munchen (Munich) as my base. The last time I had been to Germany was when visiting Berlin some lifetime ago.

Journey to the fairytale castle

I took the tour with Grayline tour group and quickly made friends with a retired chef from Australia named Nora. Nora and I fast became buddies on this tour. It took us two hours to get to the Castle. As we drove out of Munchen, the weather was still in the spring like mode. But as we entered the picturesque village of Hohenschwangau near Fussen in Southwest Bavaria, there was thick blanket of snow on the ground. For Nora, this was a dream come true and it was the first time she had seen snow. For me, it completed my fairy-tale image of the Castle.

The castle turrets were covered in snow and it gave me goose-bumps just witnessing it. The village of Hohenschwangau is so clean and its air so pure. The houses there reminded me of my childhood when my parents had this cuckoo wall clock. It was such a pretty town and no doubt the kind of inspiration for Bollywood song scenes during the 90s.

Before we visited the beautiful Castle, we visited King Ludwig II’s Linderhof Palace. From outside it looked rectangular and functional. However, being inside was another matter. Sumptuously decorated and so ornate, Ludwig II had an eye for beauty and capturing the romance. Though most rooms were small, each of them was ornately decorated, creating a warm ambience that envelope the visitors in a cosy embrace. There was an air of grandeur and pomp, with such detailing that dazzled and drew admiration.

There was one room where Ludwig II would read his books and eat alone; it was quite a dark room and had a large chandelier with endless candles. Our tour guide said, when the candles were lit, the room brightened up so beautifully. It reminded me of how Ludwig II was a man who preferred solitude to socialising. His palace depicted this nature of his. Though his bedroom chamber had vast space that was traditionally designed for entertaining court, he rarely entertained people.

Neuschwanstein Castle of my dreams

Our next stop was a visit to the much anticipated Neuschwanstein Castle. When I saw the glimpse of the Castle through the coach window, my heart leapt with excitement. Everybody on the coach felt the same as me. It was so exciting to be finally here. Despite the snow on the ground, it was a mild day with the sun out. Our tour group dispersed into their own company, leaving myself and Nora to make our way to the Castle where we would catch up with the rest of the group.

Climbing up the steep hill for forty minutes to get to the Castle absolutely killed me. Nora was fit than I was. She had to stop with me at every five minute interval so that I could catch my breath. As we climbed higher, the beautiful alpine scenery never failed to disappoint. At one point I said to Nora that I wanted to give up and that she should let me roll down the hill. But she encouraged me and together with our combined humour we made it to the top. We waited for the rest of our tour buddies to join us.

The tour inside was amazing and I was secretly glad that I didn’t give up. Even though the castle wasn’t as ornate as Linderhof, this was probably due to Ludwig passing away so soon before the project was completed, it was still a vision, especially with such scenic views of the Bavarian mountains. He had vision and eye for beauty; this was all I could see here.

Back in Munchen, I explored the city on foot and on the hop on and hop off bus. I visited the Marianplatz, Odeonplatz and the Olympia Park. Munchen is fairly easy to navigate on foot, though there were times when I relied on the underground train.

I also took the opportunity to visit the city of Mozart. I went with a small tour group to Salzburg (Salt castle) by train. There were 14 of us, including our English tour guide called Jeff, who had moved to Munchen from England. He was into cricket, who despised cricket 20/20 and preferred test matches. He made all of us do introductions in the train, which reminded me of being back in school. We all warmed to him and when we reached Salzburg, he gave us time to go explore the city on our own. I did the art of ‘flaneuring’ by having coffee and watching the world go by. Salzburg is a pretty town, surrounded by alpine views. It is enviably stunning in the spring time.

On my last day, I visited Englishcher Garden. It was the most beautiful and serene place in Munchen. I bought an ice cream and wandered through the vast landscape, stopping by the pretty looking stream and taking photos. I thought to myself that I had probably saved the best of Munchen on my last day.