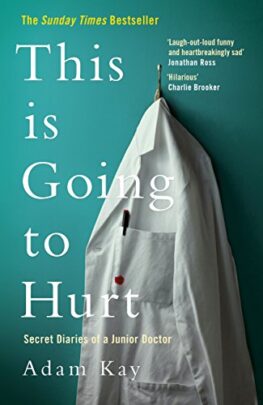 This is possibly one of the best books I have read in a long while. It’s hilarious, honest to the bones and heart-breaking. This book couldn’t have come at a right time when there is so much pressure on the NHS and the threat to its future. While many of us understand how hard the NHS staff works, we will never know what it’s like working under such gruelling pressure and often without resources.

Adam Kay is an engaging writer who uses humour as a tool to write about what life was like for him as a doctor working in a hospital. During this time, he kept a diary filled with anecdotes; some funny and some sad. And some were crazy! Like the time he worked 90 odd hours in a week, or the time when he fell asleep in his car in a hospital car park because he was so tired. There is something about the way he writes that makes him instantly likeable and he feels like a friend with an easy going sense of humour. Despite the tirelessly long shifts and declining social life, Adam Kay writes about the satisfaction he would feel at the end of the day, whether it’s delivering a healthy baby or helping a patient out.

It is one of those books that you will recommend to ten people at least. I know I did. The book doesn’t just talk about life under NHS but shines a light on how important NHS is to Britain and its future. It’s an eye opener and the kind of book that people wanting to go into medicine should read. Not so they get put off by long hours and hard work but open their eyes to the love and dedication that the medical staff have for their profession.

Twas the Nightshift Before Christmas

This is a short book, which can be binge read in one day. It follows the same anecdotal style as the first book but covers all the Christmases Adam Kay had done during his time as a doctor. He employs the same humour and at the end of the book urges people to give the NHS staff a break on Christmas day by not putting things up their orifices! Humour aside, he urges readers to support the NHS and there are some worthwhile charities he list where readers can donate money. I enjoyed this book as much as the first one. By the end of it, I was flummoxed by the crazy stuff general pop in the UK get up to. Seriously, hats off to the NHS staff for dealing with the weird and the crazies with such poker face professionalism.