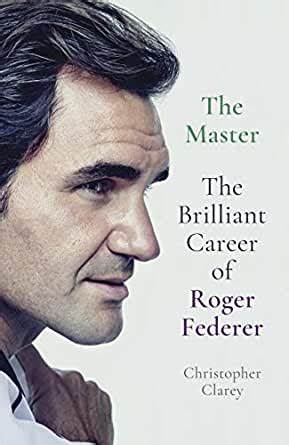 I am a fan of Roger Federer and so this book was an absolute treat to read. It was a chance for me to dive behind the scenes to find out what makes him the greatest of all time. When I think of Roger Federer, I think class and style, poetry in motion and I also think he is one of the smartest players in tennis. I have always wondered about Roger Federer’s talent. It was easy to assume that he is naturally talented, and leave it at that. So, it was an eye opener for me, if not exhaustive, to learn that perfection came from years of struggles, hard work, the wins and losses and individuals that shaped him into the tennis player he is today. I was most interested in knowing how he learned to build a positive mental fortitude in a career where intensity and stress can easily get to you.

Christopher Clarey has spent the past two decades following Roger Federer’s career, interviewing him, and observing him at such a close, professional range. Despite this privilege, he carefully balances the book, so it doesn’t appear biased. The writer gives us different layers to Roger Federer, starting with his youth as a hot-headed talented young boy, to the teenager trying to break into top 100, to the twenty something year old navigating his way post Wimbledon victory, to a thirty something year old man with impeccable records, and to a forty year old who is on the precipice of continuation and retirement. Had the injuries not been so troublesome, there would be no doubt that he would play for as long as he could. Injuries or no injuries, I would love for him to play, for as long as he can. I think most people would, especially his fans and peers who look up to him.

What I love about this book is the break down of some of the memorable matches he has played. There are technical descriptions that would satiate the tennis fans craving such information. Other players, past and present offer their insights to Roger Federer. I enjoyed reading about Pete Sampras’s observation of Roger Federer as a social person who could easily talk to other players in the locker room. He remarks that this was something he could not do when he was a pro. He offers an explanation that during his era, it wasn’t easy to compartmentalise friendship and rivalry. Whereas in Roger Federer’s era and in the current ATP and WTA circuit, it is easy to do that now.

This book isn’t a biography, so don’t expect to read about his personal life. Christopher Clarey writes in an engaging manner to keep the reader interested. I could see Christopher’s love for the sport through his writing and this made it all the more enjoyable for me to read.