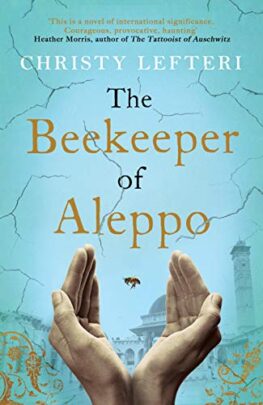 This moving story is narrated by Nuri, a Syrian beekeeper who is forced to flee the war-ravaged Aleppo with his wife Afra. We start in the present-day UK and to understand how they got here, we continuously travel back in time to their lives in Syria and their eventual journey through Europe. Their life in Syria is painted as idyllic, simple and surrounded with friends and family. When the unthinkable happens and a tragedy strikes, Nuri and Afra are forced to flee. Without any time or resource to really grieve for their loss, they are forced to make a hard and tough journey to Europe.

Along the way, we meet an assortment of characters who are either in the same boat or take advantage of vulnerable refugees. Both Nuri and Afra deal with the change in their own ways – which does test their relationship but also bring them together at the same time, possibly due to the necessity of needing each other at a time like this. We come to know later that both had been suffering from PTSD.

While Nuri and Afra aren’t based on real people, their stories reflect the realities of the refugees. Author Christy Lefteri was a volunteer at UNICEF supported refugee centre in Athens when the idea to write about the Syrian refugees came to mind. She used her own experience and the stories of the refugees to create a timeline for Nuri and Afra. Christy Lefteri has a website called www.beekeeperofaleppo.com in which you can find real life stories of refugees.