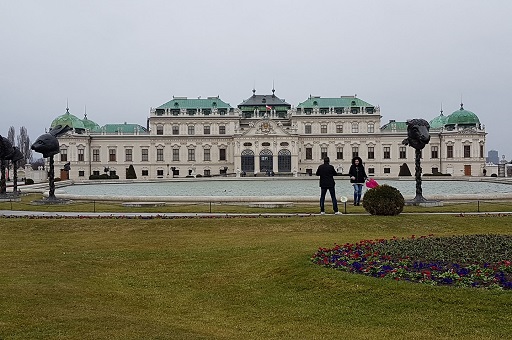 To celebrate my birthday, I chose Vienna with three wishes to my bucket list: culture, coffee, and cake.

I’d like to believe that every city in the world has a personal identity. I believe it was Jesse and Celine who first introduced me to Vienna. The Vienna I saw through their eyes, was a city of endless conversation with a perfect stranger; where a poet by the Danube river asked for a word; where a child played a classical piece, awakening the city like a fresh and invigorating dawn. The Vienna I had imagined, came to life during my stay.

The Vienna I saw is exactly like this (except for the poet, I didn’t meet one). I found myself in a Central European city, with over 1000 years old history; and with buildings side by side, each one of them hailing from a different era. If this is coexistence, then us humans should surely learn something from these ancient architectures.

Places to add to your cultural adventure

Schonbrunn Palace is an absolute treat. The rooms in the Palace are intrinsically decorated with ornate detailing that by simply looking at them feels like calories added to the waist. There were times I  had wanted to break off a rococo piece from a wall and eat it. The Hapsburg royalty certainly had taste, I’ll give them that.

While at St. Anna’s Church, I found Beethoven’s music to be uplifting and full of pomp – like being at a grand ball at the Schonbrunn Palace or the Belvedere. Whereas Mozart’s music had soulful undertones, with tick tock of a metronome. It rose and fell in a dramatic tension and for some reason, it felt very gothic to me. For a brief moment, I felt I understood Mozart. Despite the fortunes of Prague, he chose Vienna. After all, there’s a certain charm to Vienna that exude privilege and prestige.

I love coffee and it was an excuse to drink more coffee in Vienna and delude myself that I was drinking “Viennese coffee”. I am proud to announce that on my birthday, I had a cup of coffee in a non-descript coffee house, instead of a chain I would normally visit back at home. Vienna developed its coffee culture back in the 17th Century – so centuries on, the coffee houses have become a place where Viennese folks could spend hours at a time with friends, or read newspapers. I think Lorelai Gilmore needs to move to Vienna to satiate her incessant coffee needs.

Diet? what diet? Forget diet for a while when in Vienna because it’s a land of delicious pastries. I was a good girl on the trip, eating only 2 and half desserts. I had an apple strudel with custard, which was so yummy. And as much as I really wanted to finish off my bowl (and lick it), I just couldn’t find space in my stomach for it. But the truth is, in Vienna, meals and desserts are almost always generous in size when dining out.

I also tried a Mozart chocolate, which is like a small round chocolatey ball. According to an unnamed tour guide, Mozart composed a musical piece over his love of chocolates and hence the tribute chocolates were born.

There were plenty of moments in Vienna when I would think out aloud “What would Maria do?”, whenever I found myself lost in a city that refuses to have street maps.  I overcame my linguistic barrier and opened myself up to a city that embodies a culture that is both classic and modern. The Vienna I saw was a classic Vienna with buildings as old as time such as the St Stephen’s Church with its impressive Gothic altars. The modern Vienna was the one I saw at around 5 in the morning when I was on my way to the airport: young people heading back home after a night of fun, drinks, and revelry. I am sure, that amongst the group of young people crossing the road, were Jesse and Celine, on their way back to the train station to where it all started.