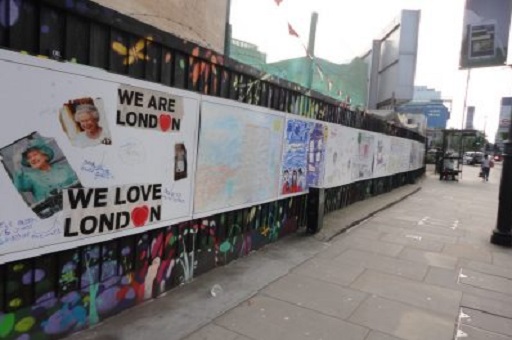 Last year in Prague, I came across the famous Lennon wall. I was told this was just an ordinary wall in the ’80s that was turned into a wall full of graffiti and messages. During the ’80s, under a Communist regime, a lot of disillusioned and frustrated youth used the wall to pour out their frustration and grievances. They also used the wall to post messages of peace and John Lennon’s anti-war song lyrics; hence it became known as the Lennon wall. The Soviets, who were deeply suspicious of this activity, would frequently repaint the wall clean. But the youth would do it again and again. Today, this wall is covered with all kinds of messages of peace and hope left by tourists who come to visit this spot. This wall, to this date, still represents ideals of peace and hope; hence why we also call it a peace wall.

If you type peace walls on google search engine, you’d find a list of peace walls around the world. These ordinary walls have been imposed at the time of historical importance and had become a voice of a community. They represented different thoughts, ideas, frustration and messages of peace. Each wall has its history and a sense of time in which they were decorated. It also acts as a mouthpiece of the community members.

Historically, peace walls around the world have been barriers to keep people separate either as a solution or division. For example, the Belfast Peace wall separating the Catholics and Protestants neighbourhoods serving as a solution. The Berlin wall is an example of a long term division between East and West Berlin. Peace walls also served as a solution to temporarily divide, such as in Baghdad between Sunni and Shia neighbourhoods. During the ’80s, Hackney citizens expressed their social concern by stamping their creative mark on a wall opposite a train station in Dalston. It bore references of cold war, Thatcherism, anti-capitalism, green peace, the miners’ strikes and of course multi-culturalism. It became known as Hackney Peace Carnival Mural.

At a TEDxRawalLake conference, the late Pakistani activist, Irfan Ali spoke about his concept of having a peace wall outside the Presidential palace where people would use it to express their concerns through creativity, such as poetry and art; and where politicians and policy makers would look at it and respond to it. He desired to open up a dialogue between politicians and community members; and help bridge a gap between the two. He felt young people were frustrated with rising unemployment, poverty, and sectarian violence. The government’s inaction had left a seed of discord among the youth, worried about their future in the turbulent Pakistan.

It is interesting to learn how walls of barriers have become a beacon of peace and hope and how it impact people living within these walls. Looking at how some peace walls have nurtured ideas and concerns through creativity, it would be great to have peace walls in neighbourhoods that could benefit from this freedom of expression and have local government councils look at the walls for inspiration, improvement and a way of dialogue with their community members. In particular, it would help bridge a gap between local government councils and young people.

What can we do?

The closure of many youth clubs across London has no doubt left many young people frustrated and lost. Instead of targeting random buildings for graffiti, young people can turn to the peace wall. The peace wall would allow a dialogue between community members and councils. If the councils pay closer attention to these walls, there’s a lot to be gained for both the community and local government. Both have the capability to work together to bring about positive changes locally.