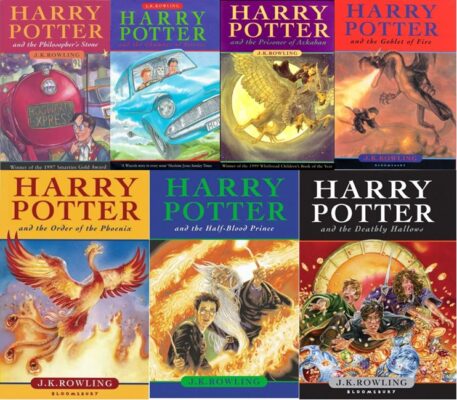 Before 2019, I had never read a single Harry Potter book or watched any of the movies. I felt I was too old now to read the children’s books but my work colleagues who love the Harry Potter books, encouraged me to read. It was because of them, my journey into the world of Harry Potter became an addictive one. Every day they would ask me where I was at and what I thought of it so far. It was as though my journey into the world of Harry Potter had made them relive their first time vicariously through me. Suddenly the work kitchen became the place to update them and encourage fun Harry Potter conversations. They were great with not revealing any spoilers and would cast meaningful glances to each other whenever I predicted something.

It took me around six weeks to complete all seven books. Then I took a mini break before reading Harry Potter and The Cursed Child, which some people would argue is an eight book of the series. I did like The Cursed Child and felt it was purely written for the fans.

I learned that no matter your age, you can read Harry Potter series and enjoy it immensely. The assortment of characters alongside the main characters are so individualised in temperament and personality that it’s hard not to have favourites. Harry Potter himself is so likeable and I feel J. K. Rowling created a character that we’d have sympathy and compassion for. There were times when I wanted to reach into the book and give Harry a hug. Even during his dark days, I felt he was justified in being angry all the time.

After completing the series, I can now see what a big deal Harry Potter is. Even after twenty-one years, the books are still selling world-wide and acquiring new fans. I am glad I read the books, though I do now wish to have read them earlier.  However, it’s never too late to start now. If you haven’t read the books, I strongly recommend you do. You’d be a muggle to miss out! Once you are done with the books, you can head over to Pottermore website and get yourself sorted into a Hogwarts House. I am in HufflePuff and my patronus is a dolphin. Not that you are asking.